Timber Lane Elementary School opened on Sept. 6, 1955, with an enrollment of approximately 600 students. Our school was one of 15 new schools opened by Fairfax County Public Schools (FCPS) during the 1955-56 school year. Our first principal was Audrey Snodgrass. Timber Lane opened during the post-World War II period known as the baby boom. In September 1955, there were approximately 32,000 children enrolled in FCPS. By September 1965, that number would climb to 94,450.

One School Closes, Another Opens

Planning for our school began in the summer of 1953 when FCPS officials contacted the owner of National Memorial Park Cemetery to acquire eight acres of land for a school site. Also at this time, the Fairfax County School Board was considering the sale of Oak Street Elementary School to the City of Falls Church. When the City of Falls Church incorporated in 1948, the Oak Street School fell within the new city's limits. A legal battle ensued to decide which jurisdiction was entitled to the property, and FCPS prevailed. Because the school enrolled a significant number of Fairfax County children from the densely populated communities around Falls Church, the sale of the school would require FCPS to reassign those children to other, already overcrowded, schools in the area. In May 1954, the School Board requested Earl Bailey, the architect assigned to design Timber Lane, to increase the size of the building from 8 to 16 classrooms. Three months later, in August 1954, the School Board awarded the contract for the construction of Timber Lane Elementary School to the Culpeper Building and Supply Corporation in the amount of $319,372. Construction commenced at a rapid pace, and Timber Lane was completed in time for the opening of schools in September 1955.

When Timber Lane Elementary School opened, public schools in Virginia were segregated by race. Our school was built to serve the predominantly white suburban communities of Poplar Heights, Walnut Hills, Forest Heights, Falls Hills, Donna Lee Gardens, Greenway Downs, Igloo Village, and later the Timber Lane and Hollywood Garden apartment complexes. At that time, the few African-American children living in our area were bused to James Lee Elementary School, an all-African-American school located on Annandale Road. At the end of the 1965-66 school year, all public schools in Fairfax County racially integrated, marking the beginnings of the ethnically and culturally diverse Timber Lane school community we know today. In February 1975, the Washington Post reported: "In 1969, Timber Lane had a minority enrollment of about two. Since then, three low and moderate income housing projects have been built in the area and today minorities make up more than 30 percent of the 422 students in kindergarten through grade six. They represent a wide variety of racial and ethnic groups. The diversity of the student body ranges economically from poverty to upper middle class."

When Timber Lane opened, our school lacked many of the features we enjoy today. Schools of the 1950s were not built with gymnasiums or music rooms, so physical education, music, and art classes were taught in the regular classrooms. The first changes to our building came in 1969 when construction began on an addition of eight classrooms, a library, gymnasium, music and band rooms, science lab, cafeteria, and a kitchen. A new suite of offices for administrative and clerical staff were also added. Additional classrooms were constructed in 1987, and our first major renovation took place from 1993 to 1995, after which our school was rededicated. The renovation added a new library, stage, and music room, carpeting in the gym, a School Age Child Care (SACC) wing, and state-of-the-art technology in every classroom. 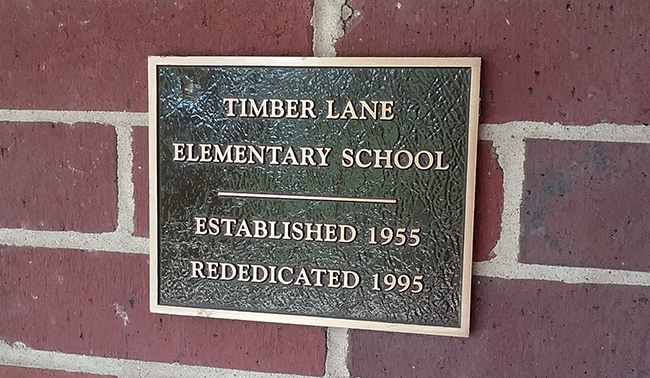 Timber Lane's first principal, Audrey Snodgrass, retired in 1968. She was succeeded by Catherine Brady, who introduced new educational methodologies like cooperative teaching and team teaching. In 1972, Patricia Harbour became our school's third principal. She introduced multi-age grouping to better facilitate students' social development and academic growth. Community engagement was also a focus of her administration, and a Parent Advisory Council was established to foster more effective home-school communication. During the 1980s, our fifth principal, Cosimo Renzi, continued our school's focus on better home-school communication, and, for the first time, all materials sent home to parents were printed in multiple languages. Also during Renzi's time as principal, students and staff developed a new school motto, "Citizens of the World Leading the Future." Renzi felt the new motto was a perfect fit because our school represented "a realistic view of the world and its future." 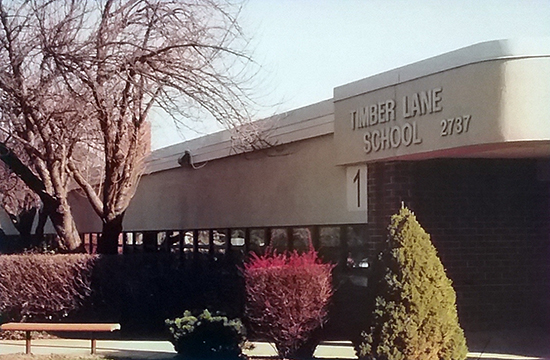 The next major change at Timber Lane arrived in 1998, when Timber Lane Elementary School became Fairfax County's first year-round, or modified-calendar school. The modified calendar structure was created to provide students with additional learning time during the year, to help students retain more information and improve academic achievement. The school year began on August 3, 1998, and adhered to the state's guidelines of 180 days of instruction, but the school days were distributed throughout the entire calendar year with nine-week sessions, followed by three-week breaks. During the breaks, students had the option of attending two-week intersessions offering enrichment and remediation courses. In 2003, the Journal Newspaper reported: "The year-round calendars reduce the time spent on teacher review at the beginning of the school year from five weeks at some schools to one week, said Anita Blain (Timber Lane's principal). It also is very useful for the 35 percent of Timber Lane's pupils in the English for Speakers of Other Languages (ESOL) program, she said. Timber Lane is expected to be accredited for the second straight year." Year-round schooling in FCPS was discontinued in 2010 due to severe budget cuts.

Today we know it as the Timber Lane Award, but this annual student award originally began in 1962 as the West Memorial Citizenship Award. The award was given in memory of two former Timber Lane students, Raoul and Beeb West, who were killed in a car accident on their way to church on December 2, 1962. The name West Award remained in use until 2003.

What’s in a Name?

Have you ever wondered how Timber Lane Elementary School got its name? It’s a story that begins with the Sewall family of Walnut Hill, who lived in our area more than 150 years ago. Learn more in this video produced for Fairfax County Public Schools’ cable television channel Red Apple 21.